Sometime before the Great War of 1914-1918, Foden's Band started an attendance register for players attending rehearsals.  How do I know?  Well right now I am holding the register, although it is owned by Foden's Band.

Who started it, I do not know that either, and the mystery is compounded by the fact that the first pages have been torn out; who by I have no idea. Nor do I know how many pages have been torn out, but this somewhat mutilated register starts in 1923, so my finger points to one of three people. Ted Wormald was the first proper Bandmaster, in office from 1908 to 1913. He was followed by bandmaster Tom Hynes who held the office from 1913 to 1924. My third suspect is Fred Sowood, not a name readers will be familiar with.

Fred joined Foden's Band in 1908 from Wyke Temperance Band as an early recruit, playing solo tenor horn at the time the band was being reorganised; he was nineteen years old. More than that, he was to be the librarian for 47 years. Fred was also to fulfil another vital role in later years. He worked in Foden's Pattern Shop which had two conveniences for Fred; one was that there were ample supplies of timber and the other was that his workplace was across the road from the band room. Oh, and slipping away from work became easy as, for many years, his foreman was Fred Mortimer’s son in law. So twice a week, on rehearsal days, Fred was called on to light the coke oven in the rehearsal room, formerly the Nail Shop of neighbours Prings Wireworks, in order to get it comfortable for the players attending evening rehearsal.  So being on hand, maybe Fred was entrusted with the register; I fear we will never know.

But things at Foden's Band were about to change. Billy Foden, the elder of the two Managing Director brothers, emigrated to Australia to farm sheep, leaving younger brother Edwin Richard in charge of the Band. The great Foden's Band had not won the Belle Vue Open since 1915, nor the National Championships since 1910 and this was 1924 and Edwin Richard Foden was both ambitious and impatient. Changes were needed and they had to start at the top.

In consultation with Professional Conductor, William Halliwell, it was decided that Tom Hynes services as Bandmaster should come to an end, and, in secrecy, Fred Mortimer was to be appointed in his place.

May I take this opportunity to relate one of many conversations I had with Flugel Horn player Hubert Shergold who joined the Band in 1909 and played for well over fifty years?  He once told me that, in his opinion, Tom Hynes was a better band trainer that Fred Mortimer. Well he said it, and he played very many years for both of them. 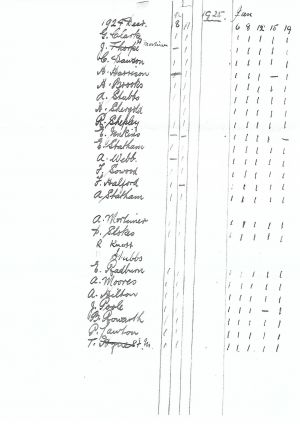