Exactly 100 years ago to the day, on the evening of 1st June 1918, a shell exploded in faraway Varennes, in the Somme Region of Picardy France, and the repercussions, if not the sound, were felt in Sandbach.

That would have been a tragedy in any household, but when the victim was the finest cornet player in the Country, and five weeks earlier his wife had given birth to an only son, no words in my vocabulary could properly describe the heartache that caused.

Edwin Firth had been the Principal Cornet of Foden's Band for nine years and set a playing standard that no one could emulate. He was the finest player of his day and some would say of any day.

Edwin was born in Earby a small town now in the Lancashire Borough of Pendle. It is easy to say he was born into a brass banding family, as his grandfather, Greenwood Firth, played trombone for thirty years for Black Dyke and his father played for and conducted the Skipton Band. His brother, Ceres, was named after Ceres Jackson, the great Principal Cornet of the Black Dyke Band.

Edwin was a child prodigy, and when brothers Billy and Edwin Richard Foden were charged in 1908 by their father to recruit the finest players in the land, it was inevitable that they should choose Edwin to lead the Band. As he was only nineteen years old at the time of drawing up a contract with Foden's, it was additionally signed by his father.

The new Foden's Band, build by Founder Edwin Foden and his two sons was an instant success. So much so that, led by Edwin Firth, they won the British Open and were runners up in the National Championships for 1909 and won both in 1910.

In 1912 they twice played for the King and Queen at Crewe Hall, where the host was Lord Crewe. That same year they won the Diamond Jubilee British Open when members of the band were awarded a medal which featured a genuine diamond.

Contest success, led by Edwin Firth, continued year on year, until in 1917, for some unexplained reason, Edwin decided to enlist in the Army and serve in the Great War.

Early in 1918, his regiment was posted to Varennes in France where he was tragically Killed. Back home his wife Doris had, only five weeks earlier, given birth to a son, Edwin Twemlow Firth; father and son were destined never to meet.

With the Centenary of Edwin's death approaching, Foden's Band decided that such a significant event should not pass unnoticed, so four coincidental events were arranged in the area.

To coincide with the events in Sandbach a delegation of the 'Brass Band of Amiens' (Orchestra de Cuivres d'Amiens) and members of the association House of Australians (Maison des Australiens) held a remembrance ceremony at Varennes to remember Edwin. At the event, Maurice Fourdrinier, OCA Chairman, presented a memory plaque and the Union Jack Flag in front of Edwin's Grave, Marie-AgnesHubau, MDA member, gave a prayer of remembrance, Michel Brisse, MDA member, laid a poppy wreath and Patrice Letalle, OCA tuba player, read the 'Ode of Remembrance' written by Laurence Binyon. A moving last post was played by Eric Poiret, OCA Principal Cornet.

Marjorie Newton of Sandbach Royal British Legion, arranged for Services at Elworth and Sandbach Cenotaphs to be held on the 1st June where a small group of players from Foden’s played as well as Mark Wilkinson who played 'The Last Post'

More than that, the audience were able to hear two 1914 recordings of Edwin's wonderful playing, crowned by Mark Wilkinson playing 'Goodbye' Edwin's final solo with Foden's Band, on Edwin's own cornet of 1902

Amongst the audiences were around twenty members of Edwin's extended family, many of whom had never met before. It concluded a memorable weekend. 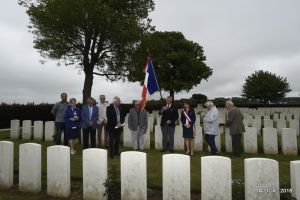 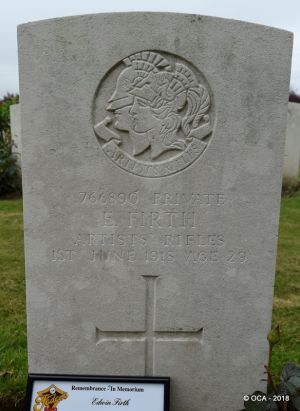 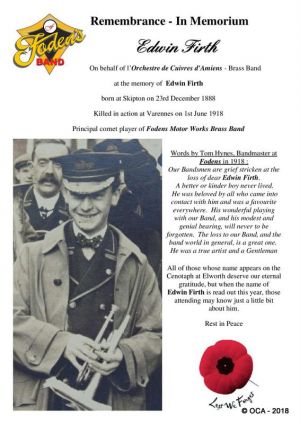 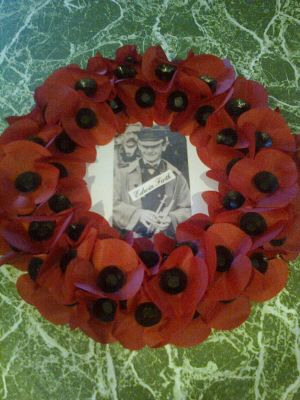