In 2018, Foden’s Band has been commemorating the life and untimely death of Edwin Firth, probably their  greatest ever Principal Solo Cornet player.

I have always had a special affinity to Edwin as his son Edwin Twemlow Firth , whom he never saw, was for many years my Director at Fodens Ltd.

As part of the commemorations, I have been entrusted, by Edwin’s grandson Martyn, with sorting out Edwin’s memorabilia, nearly all of which has lain untouched for over a hundred years.  It is an honour and a privilege, and a significant challenge.

Instruments, Cups, Medals, Photographs by the hundred, postcards, letters and more.  Hopefully I can return to describe more of these treasures, but for now I will confine myself to just one; one which Edwin owned, handled and blew, but almost certainly not one he seriously played.

When I first laid my hands on this keyed bugle, recovered from a family loft, it was as black as coal, a century of reaction between the metals and the atmosphere of a hundred years. What was I to do with it?

Simple; I entrusted it to my long time friend Paul Andrews of Warrington based instrument repairer Brass Toff.  It was much too precious for me to deal with.

I don’t expect him to divulge to me his trade secrets, but in any event they must include a measure of magic, because the transformation he exacted was magical.

What he delivered back to me was a beautifully crafted keyed bugle made mostly from copper.  It had five chromium plated keys and a brass reinforced bell.  The black has, like magic, disappeared. I have a handful of Edwin’s mouthpieces, but which, if any, Edwin used I have no idea.  Did he even seriously play the bugle; we will never know.

Then into my head came the obvious questions; how old is it, and how much might it be worth?

Fortunately, on the bell was inscribed, very clearly and in beautiful writing, the following.

I could scarcely believe what my encyclopaedia Google told me, so I wrote to Hornimans, historians and keepers of historical musical instruments.  They confirmed that Mr Greenhill was indeed a famous instrument maker whose premises were at 18 Little Britain, a street in London.  More than that, they dated the instrument as having been manufactured in 1825.  No mistake 1825.  I was holding a keyed bugle which had been owned by the Great Edwin Firth and which was only a few years short of being 200 years old.  Beat that for provenance.

Sothebys and Bonhams might, in earlier years, have been able to advise me, but both these auction houses now seem to have ceased trading in these instruments.

Back to Edwin’s memorabilia.

Among all the envelopes I found one which featured very distinctive hand writing which I instantly recognised; it was that of my old boss Edwin Twemlow Firth, son of the Great Man.

In 1992 he had written to, or visited, Sothebys at Chester to seek a valuation.  Bear in mind the bugle would then have been well oxidised and black.  Their estimate was that in a sale it would fetch in excess of £2,000. That was around forty years ago!

Now all I want is a valuation. 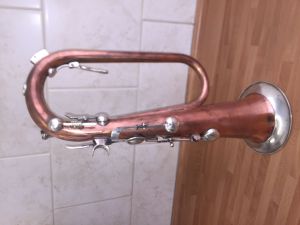