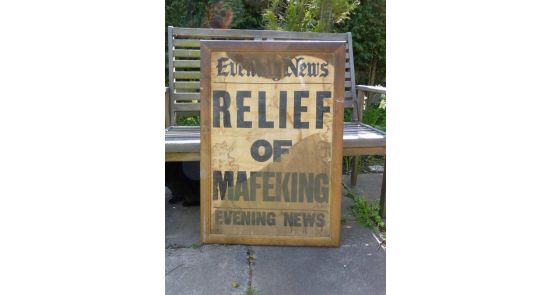 This great poster from 1900 is the genuine article having been produced by the Evening News around the 19th May 1900. Now suffering a little from water damage the poster came into the hands of Jimmy Charles in 1983.

The “Relief of Mafeking” was when British Soldiers were stationed in South Africa between the 16th and 17th May 1900 whilst defending the town from the Dutch settlers known as Boers who wanted independence from Britain.

Unable to stop the Boers the British were penned in at the small African township called Mafeking. The town had been left under siege for 217 days until it was finally given its freedom by the relief forces.

The British troops in the town were led by Commanded Lt. Gen. Robert Baden-Powell (Later founded the Scout Movement).

The event was transmitted to Reuters in London at 9.17pm on Friday the 18th May 1900 and appeared in the papers the following day.

National celebrations took place to celebrate the release of our troops and a major event was subsequently arranged to take place between Wheelock, Sandbach and Elworth.

This was the event that eventually led to the formation of the FODEN’S BAND which came into existence from the old Sandbach Town Band and Wheelock Temperance Society Band who had been playing during an event to celebrate the event at Mafekin. A dispute between the Brass Band players and the organisers of the event led to the formation of another band (Elworth Brass Band) which involved the Foden family both as players and organisers. This band in turn also had a dispute with organisers of the new King’s Coronation events in South Cheshire and after purchasing new instruments for a 3rd band the Foden family finally put their name on the banners in 1902.