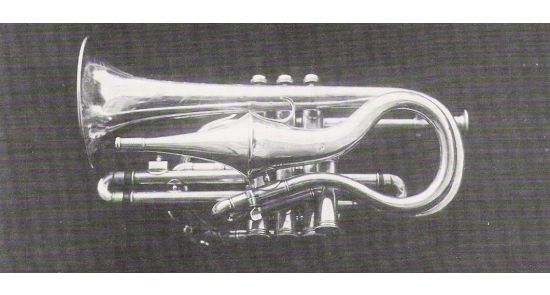 Echo cornets were made from the late 19th century. They were unique in that they had a fourth piston valve, and a second bell, which tapered in the opposite direction as compared to the main bell. When the airflow was redirected to the second bell (by depressing the fourth valve) a muted effect was achieved.

One of the most famous cornet solos for the Echo Cornet is 'Alpine Echoes' written by Basil Windsor (who was in fact the Pseudonym of Eli Smith a music teacher from Manchester) who composed Alpine Echoes for Harry Mortimer to play.

In 1927 Harry was appearing in a number of “Celebrity Concerts” playing cornet solos, the Post-horn, a long Bach Trumpet, a tiny pocket-cornet and what became known as the Famous Echo Cornet.