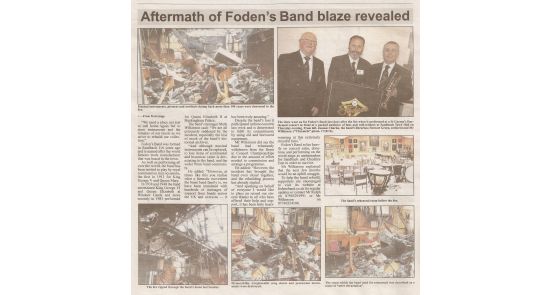 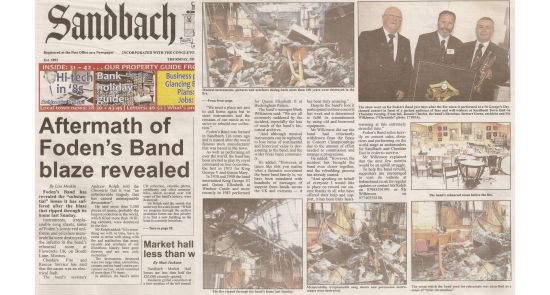 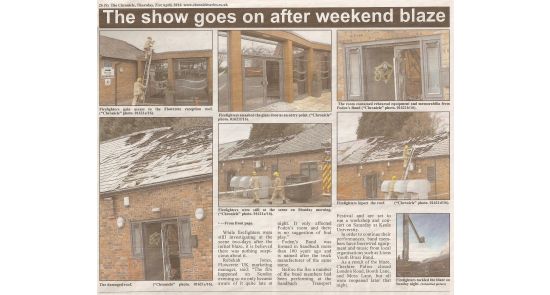 On Sunday 17th April 5.45pm an automatic fire alarm was set off and alerted the fire brigade to smoke and flames in the Foden's bandroom.  A fire crew from Sandbach was despatched to attend the incident and soon realised that more pumps were needed as flames were seen coming out of the building to a height of about 30 feet. At 6.15pm crews from the surrounding area arrived at the scene and started work to extinguish the flames. In all eight pumps attended the incident as well as a hydraulic platform. Two pumps were used to bring water from the nearby canal to the scene with three or four being deployed round the back of the site and the others were used to tackle the fire from the main entrance to the Flowcrete site. At first the hydraulic platform was deployed at the back of the building to tackle the fire from above but by 9pm was moved to the front to mop up small outbreaks in the adjoining roof space.

Crews prevented the fire from spreading into the reception area of Flowcrete and the rehearsal room below but the upper floor which stored the main bulk of the bands music was so badly damaged that it collapsed into the space below destroying some of the instruments and possibly a number of trophies the band had been awarded over the years.

By 8.15pm the fire was under control and the number of engines was reduced to six. By 9.50pm the amount of crews was again reduced as it was a dampening down excercise and salvage operation with fire personnel retrieving as much as they could from the Rehearsal room.

The cause of the fire was later revealed as an electrical fault.