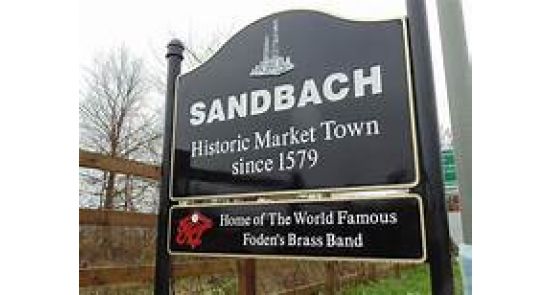 Sandbach Town Council is pleased to announce that new town and village entry signs are in the course of being installed at several key locations across Sandbach.

The project was started in 2009 by Cllr Graham Bell, who did an excellent job on the design and specification for the signs, but although a new sign at Wheelock Wharf was installed at that time, other signs were put on hold in the absence of funds.

Recent funding from Cheshire East Council enabled the project to be re-started, and further consultations have taken place with community representatives of the Tidy Town Group, local Town and Cheshire East Councillors and the public through “Town Talk”, with positive feedback.

Cllr Mike Benson, Chairman of the Community & Environment Committee said “In addition to new and more noticeable Town Entry signs, the Sandbach Neighbourhood Plan, completed in 2016, emphasised the importance of identifying our individual villages of Elworth, Ettiley Heath, Sandbach Heath and Wheelock, and the new village entry signs will make an important contribution to support this feature of the Plan. Sandbach Town Council is also pleased to take this opportunity, by the additional of an additional plate on the Town Entry signs, to recognise the role of the Foden's Brass Band in Sandbach.”

John Barber, Chairman of Fodens Band, said “Foden's Band is delighted to be associated with this project and for the on-going support of Sandbach Town Council. All at Foden's are extremely proud of our historic association with Sandbach spanning over 117 years.”