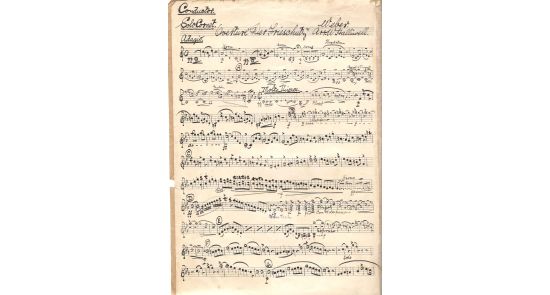 Der Freischütz, Op. 77, J. 277, (usually translated as The Marksman or The Freeshooter) is a German opera with spoken dialogue in three acts by Carl Maria Von Webber with a libretto by Friedrich Kind. It premiered on 18 June 1821 at the Schauspielhause Berlin. It is considered the first important German Romantic Opera, especially in its national identity and stark emotionality.

The plot is based on the German folk legend of the Freischutz and many of its tunes were thought to be inspired by German folk music, but this is a common misconception. Its unearthly portrayal of the supernatural in the famous Wolf's Glen scene has been described as "the most expressive rendering of the gruesome that is to be found in a musical score".

This arrangement was made in 1918 by William Halliwell

(THIS PIECE HAS BEEN RECENTLY RECORDED, PLEASE VISIT THE RECORDINGS SECTION)