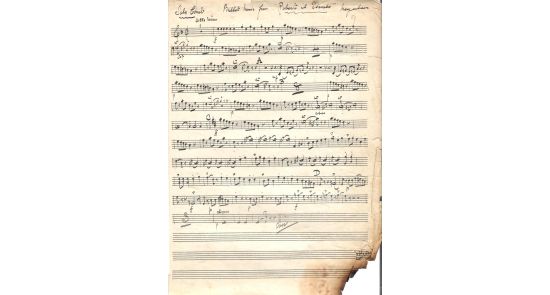 Robert the Devil (Robert le Diable) is a work by Giacomo Meyerbeer, often considered as the first example of Grand Opéra. The libretto was written by Eugène Scribe and Germain Delavigne and takes its cue from the medieval legend of Robert the Devil.

The dramatic music, the harmony and orchestration of the opera, its melodramatic system and the sensational stage effects (especially the nuns' ballet) led to an immediate success and confirmed Meyerbeer as a leading opera composer of his time.

Robert le diable was the first staging of a new opera created by the new director of the Paris Opera Louis Véron and success led him to sign the commitment of new works with French composers such as Meyerbeer himself, who shortly thereafter wrote The Huguenots, Fromental Halévy with La Juive and Daniel Auber with Gustave III.

This arrangement was made in 1924